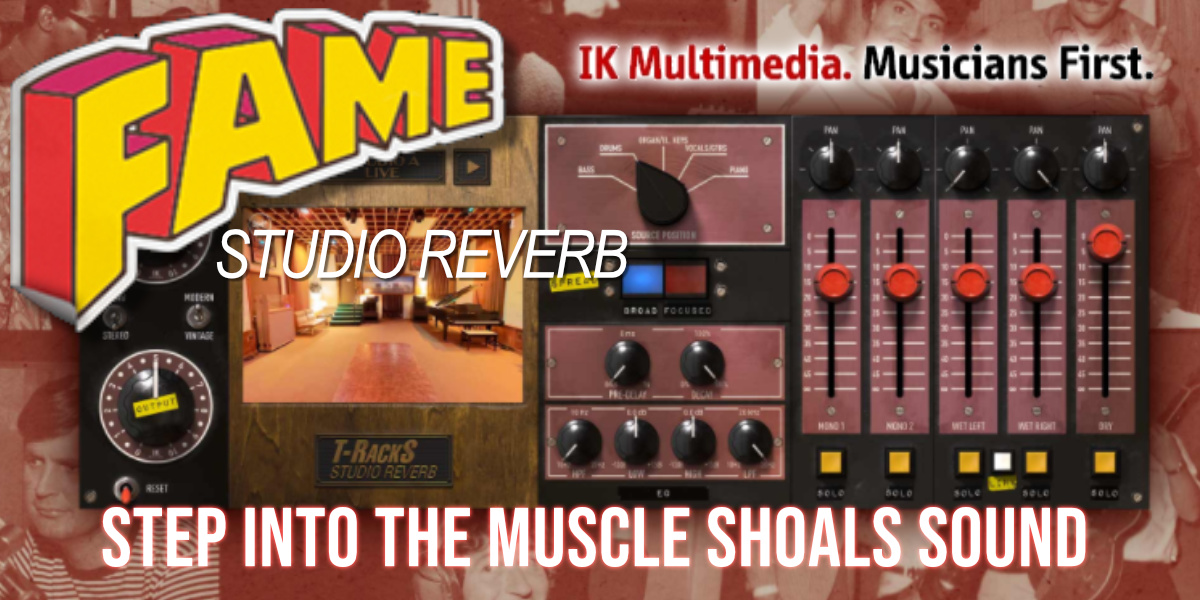 November 4, 2021 – IK Multimedia announces FAME Studio Reverb for T-RackS, capturing the sound and vibe of FAME Studios and offering innovative controls for achieving the Muscle Shoals sound in any studio.

Among recording artists, it’s called the “hit recording capital of the world.” For over 60 years, FAME Recording Studios in Muscle Shoals, Alabama, has produced an endless stream of iconic hits powered by a sound that simply can’t be found anywhere else in the world, until now.

An entire studio’s worth of spaces
T-RackS FAME Studio Reverb offers a total of 9 spaces, with 2 live rooms, 5 iso booths, an EMT plate reverb and FAME’s newly-restored echo chamber, plus Modern and Vintage modes for each, giving users a full suite of reverb effects in a single plug-in.

A newly-restored part of music history
In addition to the rooms and plate, IK is proud to have helped FAME’s Rodney Hall restore one of FAME’s original echo chambers. Long out of use, this newly restored chamber is equipped just as it was in the ’60s and sounds every bit as amazing now as it did then.

That exact sound, instrument by instrument
IK worked hand-in-hand with FAME to precisely capture not just the mic placement used on all their iconic albums, but where the performers were positioned as well. Users can select which instrument they’re processing and T-RackS FAME Studio Reverb instantly re-positions both the microphones and source in the room, right where the magic happened.

Studio A boasts a Neve 8232 console, while Studio B, recently renovated and restored by Rodney and GRAMMY Award-winning producer Glenn Rosenstein, offers an SSL 6056 E formerly loved by Stevie Ray Vaughan and used on his most successful albums.

Or, for a more vintage sound, users can switch either studio to use FAME’s original Universal Audio 610 console, hand-built for FAME, to precisely capture the vibes of FAME’s earliest decades.

The deepest level of authenticity
To capture both the unique acoustics of each studio, IK used its unique Volumetric Response Modeling (VRM™), an advanced hybrid convolution technique, to deliver the highest-quality reverb effects possible.

Convenient tone shaping
T-RackS FAME Studio Reverb offers all the necessary controls to shape the spaces including reverb time, width and frequency controls, microphone controls (left, right, or both), and accurate leveling/monitoring of the mixed signals.

To offer even more realism, when using the two studio’s live rooms, FAME Studio Reverb offers two faders for mono room ambiance, which can be mixed into the stereo signal or used alone, just as if recording at FAME itself.

The power of T-RackS
Like all T-RackS plug-ins, T-RackS FAME Studio Reverb offers two ways to work: as a single plug-in, or within the T-RackS 5 shell.

Pricing and availability
T-RackS FAME Studio Reverb is coming this November and is available for pre-order from the IK Multimedia online store and from IK authorized dealers worldwide at a special limited-time introductory price of $/€129.99* (reg. $/€149.99).

No Comments
posted by simeon on Thursday, November 4th, 2021 at 6:40 pm in News, Uncategorized